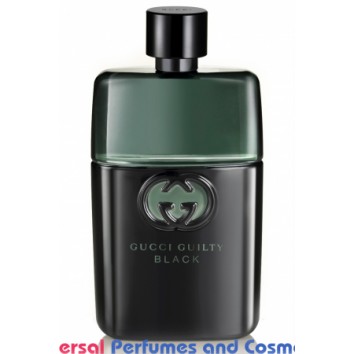 Gucci Guilty and Gucci Guilty Intense have been heralded as the scents of 21st Century seduction. In these audacious, globally award-winning perfumes, today’s guiltless young men and women have discovered the scent of provocation that has proved utterly addictive. Thrill seekers the world over have been seduced into indulging in guilty pleasures. Now, in the dark and mysterious Gucci Guilty Black, the story becomes still more compelling, giving it a new, more passionate and more daring edge. A sequel and a new chapter.

Creative Director Frida Giannini remarks: “These characters fascinate us as they are taken on a life of their own. We are eager to know about the next chapter in their story as it unfolds through Guilty Black”. The Guilty Black lovers bring out the most thrilling sides of each other: alone they are magnificent, together irrepressible. Fearless in their passion, they are brazen, shameless, unpredictable – ready for each and every explosive encounter. Their attraction is instinctive: they go where they sense danger and each other. Too much is never enough for our young hedonists, who drive each other to live life to the fullest. Again and again, they give in to pleasure and the excitement of breaking the rules.

Gucci Guilty and Gucci Guilty Intense are scents of indulgence and guilty pleasures. Now, in Gucci Guilty Black, the house chooses provocative, glossy black to encase the glowing red and green of its iconic webbing.

The scent captures the senses with an explosion of bracing green coriander and invigorating lavender that evokes youthful confidence.

The patchouli that is the hallmark of Gucci fragrances reaches a new potency blended with a lavishly textured cedarwood - intensity at its most alluringly energetic.

Gucci Guilty took the house’s golden entwined Gs and used this emblem as an incitement to subvert. Gucci Guilty Black carries this association still further – never has the coupling within this logo appeared more provocative. The brand is equally famed for its iconic green and red web stripe – signalling both “made in Italy” and “luxury heritage”. here this webbing is transformed into gendered colour schemes: danger-signal red for the Guilty Black heroine, unfettered green for its hero. The flacons are uncompromising bold, black perfection. As one would expect from Gucci, there is great tactile appeal in the bottles’ marriage of high-tech and high style. Giannini notes: “I wanted to create a provocative design for Guilty Black, yet building on the now iconic packaging of Guilty. We added an evocative red glass for the female fragrance, green for the male, as a tribute to the timeless Gucci web stripe.”

The imagery through which the house has brought Gucci Guilty to the world has captured attention: a spectacular combination of director Frank miller’s film noir and Frida Giannini’s sensuality. For this new project, art direction was again overseen by Riccardo Ruini, Creative Director at REm (Ruini e mariotti). Ruini has art directed Gucci’s advertising for the past five years. The campaign for Gucci Guilty Pour Femme won the coveted prize for Best media Campaign at the 2011 US FiFi Awards.

The advertisement was shot at Cinecittà Studios, the legendary home of Italian cinema. Again, its director was Sin City creator Frank miller; its stars femme fatale Evan Rachel Wood and hollywood action hero Chris Evans. Now, in Gucci Guilty Black, we join them for a fresh chapter in their story, and a thrilling sequel to what has come before. The chemistry between them is electric.

Leading fashion photographers Mert & Marcus were again responsible for the print advertising - explosively sensual images in which the gleam of the lovers’ skin is cast in red and green light. Mert & Marcus explain: “We see the couple at night, in flagrante, washed in electric green and red neon. The aura is raw and compelling. very modern, very sexy, very Gucci.”